You are here:Home NordicTrack Exercise Bikes 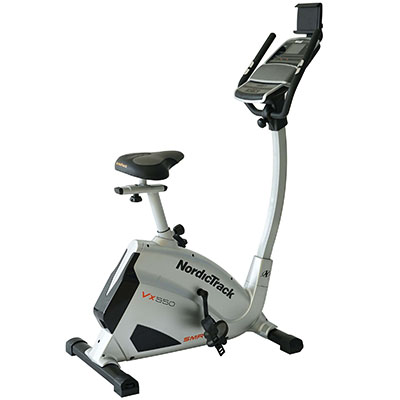 Founded as PSI NordicTrack, Inc. in 1975 by Edward Pauls in   Chaska, Minnesota, NordicTrack became mainly known for introducing its cross-country ski simulator that was launched in the late 1980s. Since then the company has started to manufacture other fitness equipment, including a wide range of cardiovascular machines. Today the NordicTrack brand is owned by a giant on the fitness equipment market, Icon Health and Fitness.

NordicTrack products are simple to use, but innovative and multi-functional to cater for the needs of different home users. Quality is something you can definitely expect from NordicTrack and their products are rigorously tested to provide you with reliable fitness equipment manufactured to the highest standards.

NordicTrack very often provide their bikes and other machines with plenty of console features that make your workout more interactive and personalised. Many of the NordicTrack exercise bikes, similarly to their other fitness equipment, feature some of the latest technological innovations such as iFit® Card, AutoBreeze™ Fan, InterPlay™ Music Port. NordicTrack exercise bikes have a sturdy frame construction and provide a very safe and comfortable workout. Many reviewers who have used their speed bikes confirm that they are constructed to imitate a real ride, giving you a feel as if you were using an outdoor bike.

NordicTrack exercise bikes are good quality machines that you can buy at reasonable prices that start from around £270. They are offered with a 1-year warranty for parts and labour that can be extended to 2 years when registered within 28 days.

Summing up, we can highly recommend NordicTrack bikes, especially if you look for a solid machine that will not let you feel bored during your workout.

With a long history of producing some great exercise bikes, the NordicTrack brand has long been associated with quality as well as quantity. With a wide…

The NordicTrack GX 2.7 U has not yet been reviewed, but is available at the cheapest price from NordicTrack for £369.00

What is there to say about NordicTrack that hasn’t already been said? Not much! They are without doubt one the leading global manufacturers of home fitness…

The NordicTrack GX 4.4 Pro currently available for £474.05 from Sweatband.com

The NordicTrack GX 4.5 Pro has not yet been reviewed, but is available at the cheapest price from Sweatband.com for £521.55

The NordicTrack GX 8.0 has not yet been reviewed, but is available at the cheapest price from Sweatband.com for £664.05

NordicTrack is not a brand known for sitting on its laurels, even though it does have some sizeable laurels to sit on! When we spotted that…

The NordicTrack GX 4.6 Pro currently available for £759.05 from Sweatband.com

NordicTrack is one of the world’s leading  producers of home fitness equipment. Their products have become increasingly reflective of the connected world we live in and…

The NordicTrack Commercial S10i currently available for £1199.00 from Sweatband.com

The NordicTrack Commercial VR25 Recumbent has not yet been reviewed, but is available at the cheapest price from NordicTrack for £1199.00

Without a doubt one of the world leaders in home fitness, NordicTrack has been there, seen it, done it, bought the T-Shirt, burned the T-Shirt, and…

The NordicTrack Commercial S22i currently available for £1614.05 from Sweatband.com

The NordicTrack Commercial S27i has not yet been reviewed, but is available at the cheapest price from NordicTrack for £2499.00


NordicTrack Exercise Bikes No Longer Available In The UK

With a wide selection of models in their current range that are designed for everyone from casual users to serious athletes, NordicTrack have made it their…

NordicTrack is one of the most experienced and respected names in home fitness. Their range of exercise bikes has always provided for just about every type…

NordicTrack is one of the best-known names in home fitness and they’ve got a reputation for producing machines that deliver amazing bang for buck.  Their current…

With more exercise bikes to choose from than ever before it’s sometimes hard to see the difference between one model and the next. There are some…

With a reputation for manufacturing some of the most compelling offerings in today’s global home fitness market, it’s fair to say that NordicTrack know a thing…

Build it well. Pack it with bells and whistles. Sell it at a reasonable price. This is the modus operandi of NordicTrack and for the most…

With a reputation for quality and high-tech training features, NordicTrack has dominated the home fitness marketing for decades. With something for just about everyone, their range…

One of the biggest names in home fitness, NordicTrack have been creating high quality exercise bikes for a very long time. Over the last few years…

The NordicTrack Commercial S15 Studio indoor cycle is a bike we’ve been wanting to test out for a while. Part of the existing range of NordicTrack…